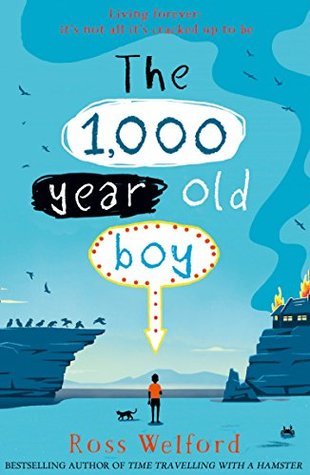 Other Books by the Author:

Time Traveling With A Hamster

What Not To Do If You Turn Invisible

The Dog Who Saved The World

The Kid From Space

There are stories about people who want to live forever.

This is not one of those stories.

Alfie Monk is like any other nearly teenage boy - except he’s 1,000 years old and can remember the last Viking invasion of England.

Obviously no one believes him.

So when everything Alfie knows and loves is destroyed in a fire, and the modern world comes crashing in, Alfie embarks on a mission to find friendship, acceptance, and a different way to live… which means finding a way to make sure he will eventually die.

A thrilling adventure, The 1,000 year old boy examines the brutal reality of what living forever would entail. Everything from watching those you care about die, to the physical complaints of worn down teeth and being stuck in a body that will never grow up.

When a tragic accident strikes Alfie’s life, he suddenly finds himself totally alone, until he meets Aiden and Roxy. But when they uncover the truth - that Alfie is no normal eleven-year-old, but actually over 1,000 years old - they vow to help him find a way to return to normal. But bad people are after the secrets Alfie holds, secrets that might just cost him - and his friends - their mortal lives to protect …

Ross Welford never fails to wow me with his books. Although I always give him extra points since his stories are set within the North-East of England, in and around the area I grew up. I can’t tell you how nice it is to read about places I know and love so well! With that in mind, this books gets an automatic 5 stars for setting.

Told from the POV of two characters, the reader really gets a sharp comparison between the two storytellers. First there is Alfie (the 1000 year old boy) who is lonely, terrified by technology and annoyed by the inaccuracy if history. Then there is Aidan, a modern day pre-teen who soon realizes his own problems really aren’t that big after all.

Through their journey they are accompanied by their friend, Roxy who - despite not getting her own POV -  dazzles upon every page with her strong words and personality. She really was a character I adored!

Together the three of them set out on an incredible adventure that was full of imagination and ingenuity. Like all Ross Welford’s books, this story was set in modern reality, with just enough magic to still remain in the realms of plausibility. It’s a huge “what if…” sort of story and will leave you pondering possibilities long after you turn the last page.

If you enjoyed this, I would also check out THE DOG WHO SAVED THE WORLD and THE OTHER ALICE for more fun, magic/sci-fi style reads.

Posted by whispering words at 17:31