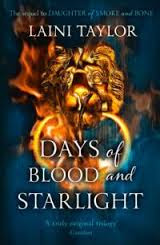 Days of Blood and Starlight – Book Review
Laini Taylor
YA Fantasy
Synopsis:
Once upon a time, an angel and a devil fell in love and dared to imagine a world free of bloodshed and war.

This is not that world.

Art student and monster's apprentice Karou finally has the answers she has always sought. She knows who she is—and what she is. But with this knowledge comes another truth she would give anything to undo: She loved the enemy and he betrayed her, and a world suffered for it.

In this stunning sequel to the highly acclaimed Daughter of Smoke & Bone, Karou must decide how far she'll go to avenge her people. Filled with heartbreak and beauty, secrets and impossible choices, Days of Blood & Starlight finds Karou and Akiva on opposing sides as an age-old war stirs back to life.

While Karou and her allies build a monstrous army in a land of dust and starlight, Akiva wages a different sort of battle: a battle for redemption. For hope.

But can any hope be salvaged from the ashes of their broken dream?
Review:

I loved The Daughter of Smoke and Bone and was so excited to finally get my hands on this sequel. Along with its gorgeous cover and enticing blurb – Days of Blood and Starlight is a fantastic read and one that continued to amaze me with the scope of Laini Taylor’s imagination.
The story picks up where the last book left off, with the breaking of the wishbone. Now with her past revealed and her heart broken with the truth of Akiva’s betrayal, Kaoru once more rejoins the world of the Chimaera. As Brimstones only successor, she sides with Thiago, her former executioner, to try and help rebuild what is left of her people. But will the Chimera ever truly trust her again, knowing she had once loved the enemy?

Meanwhile Akiva, after being shunned by Kaoru, returns to the Angels and is a dubbed a hero for his actions. Yet his heart is black with sorrow and heartache for what he has done, and only his brother and sister know the truth of where Akiva’s true alliance now lies. With the Chimera. And with Kaoru.

From the ashes of destruction, can the world Kaoru and Akiva dreamed of come to exist? Can they rekindle their love or will war and duty keep them apart? And what secrets have they yet to uncover…

This book was an incredible read and one that I really enjoyed. Laini Taylor’s vivid descriptions build a creative world of fantasy and reality that will simply blow your mind. Her characters have great depth and the story is so full of twists and turns that you will not want the story to end.

Admittedly however, I did think the book got off to a slow start. Also as it had been several months since I had read The Daughter of Smoke and Bone, it took a couple of chapters before I truly fell back into the story. There are a lot of characters, some who I struggled to recall at first, but once you remember who everyone is and the part they played, the book reads smoothly.

Yet still the tempo doesn’t really pick up until about half way, but once it does you will find the book almost impossible to put down. All the emotion, humour and intense drama that I loved about the first book really comes into play here, and Laini Taylor will sweep you away with her incredible fight scenes and emotional upheaval. It is a truly fantastic sequel, and didn’t read at all like a filler book as so many middle books of a trilogy do.

For anyone who loves fantasy, this is a series I would highly recommend. 4 stars!

Posted by whispering words at 07:06 No comments: