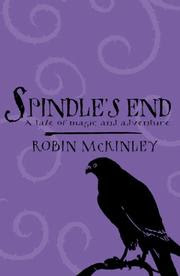 Spindles End – Book Review
Robin Mckinley
YA Fairytale Fantasy
The princess has been missing since she was a baby. And Rosie, an ordinary girl, is growing up in an unremarkable little village far away from the royal city.
Unremarkable, that is, in a land where magic is so common that it settles over everything like dust. But a fairy curse is the kind of magic nobody wants, because it always comes true. And Rosie cannot stay ordinary forever…
Robin Mckinley reweaves a classic fairytale sparkling with adventure and magic, some wonderful animals and birds and – of course – fairies, both good and bad.
A retelling of Sleeping Beauty, ‘Spindles End’ is an odd book in many respects. Written in a voice that is all narrative it took me awhile to get into, however even though it was heavily descriptive with very little dialogue I thought it had the perfect fairytale ring to it – So much so that I could picture myself sitting around a fire having someone read this book to me rather than actually reading it myself (Those who’ve read it will understand what I mean).
Also ‘Spindles End’ doesn’t really have a main character. Written into five parts it sort of follows the life of one character until about halfway through the book until Rosie is old enough to take over, from which point the story starts truly being about her. While some people may find this a little disjointed and I thought it worked rather well, giving plenty of back-story and allowing the underlying tension to build up slowly.
However that leads me to the writing style itself. As I mentioned earlier the story is heavily descriptive and honestly, at times incredibly random. For instance several pages could be devoted describing the customs of magic or the speech of animals and birds, or as in the opening chapters – the magic dust that gathers in tea pots. While interesting to read these pages don’t really progress the story any further and makes the book unravel at a very slow pace. (However as I discovered – this makes it perfect for long train journeys)
Yet I really liked how Mckinley used aspects of the original fairytale throughout the story, shaping and twisting them into her own moulds to create a more compelling read that kept me engrossed for hours. With lots of unexpected plot twists and again – much randomness – ‘Spindles End’ created a vivid magical world full of unique characters who were always doing the unexpected.
All of which led up to an ending that I never saw coming – at least not in the way I imagined – and closing the book I was left with that nice, satisfied feeling that always comes after finishing a good story. I must comment though that due to the heavy text and descriptions I don’t think that this book would be for everyone yet if you love unique retellings of fairytales, massive amounts of world building and much randomness that doesn’t always make sense (but is fun to try and work out), or are just wanting to read something a little different then this is a book for you.
Magical, old-worldly and all sorts of other things in-between, ‘Spindles End’ is a bed-time-story perfect for people of all ages and I’m looking forward to reading other works by Robin Mckinley, she is a truly talented author :)
﻿
Posted by whispering words at 12:05 1 comment:

A Most Improper Magick - Book Review 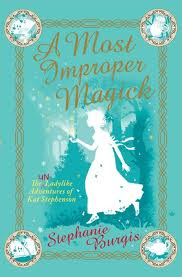 At twelve years old, any proper young lady should be sitting quietly at home practising her embroidery, learning French and keeping her opinions to herself.
But Kat Stephenson is no ordinary young lady.
Kat’s father may be a respectable vicar, but her late mother was a notorious witch, her brother has gambled the whole family into debt, and Kat herself is the newest target of an ancient and secretive magical order.
In this first thrilling instalment of ‘the unladylike adventures of Kat Stephenson’, Kat sets out to win her older sisters their true loves, battling highwaymen, practicing magic and breaking all of society’s rules along the way…

I must admit that when I first picked up ‘A most Improper Magick’ I had never heard of it before. In fact I just thought that it had a really nice cover and I only ever intended it be a light read to kill some time while I waited for my friend to finish her shift at the library.
I never imagined how quickly I would get drawn into Kat’s world of magic and mayhem and an hour later I was completely engrossed!
I think Stephanie Burgis is a genius!  ‘A Most Improper Magick’ was extremely well written and although I may sound a little old fashioned, the phrase ‘it was simply a delightful’ seems to fit it perfectly.

Light-hearted with plenty of plot twists, Kat is a fantastic character. Funny and outspoken, this book is about her determination to save her family from both social and financial ruin, find her sisters love (even if she doesn’t really understand the point of a husband herself) , all while discovering how to use the powers left to her by a mother she has no memory of. All, while enduring the endless rules and etiquette enforced upon her by her stepmother and older sisters.

Yet despite their determination to keep her out of trouble Kat constantly finds ways to break the tight fitting rules of society, all of which lead to her adventures with magick mirrors, secret orders and daring highwaymen.
Honestly this book was such a fantastic read I think it would be loved by people of all ages, but most especially young girls, tomboys and anyone with annoying older siblings! 5 stars :)
﻿
Posted by whispering words at 19:46 1 comment: