A Tangle of Magicks - Book Review 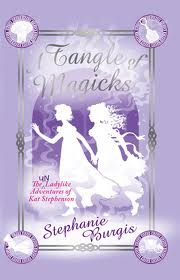 After her antics in ‘A Most Improper Magick’ Kat Stephenson is back to cause more chaos! Stepmama drags the family to Bath to find Kat’s sister a new suitor. But, unknown to most of its gossipy visitors, Bath is full of wild magic. When Kat uncovers a plot to harness this magic in the Roman Baths, she finds her brother Charles is unwittingly involved. Kat must risk her newfound magical powers as she defies the order of the Guardians to foil the plot and clear her brother’s name…


‘A Tangle of Magicks’ is utterly fantastical. The second book in Stephanie Burgis’ Kat series, this story is just as spellbinding as the first, only with an even more captivating storyline. Full of amazing characters, magic and plot twists, I couldn’t help but fall in love with this book!
This second story picks up a few weeks later from the happy-ever-after ending in the book one, and begins with Kat’s quick recap of events. Both her older sisters are happy, what with Elissa literally about to be married and Angeline having finally found her true love. For once everything is right and happy in the Stevenson home - until inevitably, disaster strikes.
Now, with Kat banished from the magical order and Angeline accused of witchcraft, Step-Mama quickly relocates the Stevenson family to the famous city Bath, striving to avoid the gossip and scandal which is sure to follow.  Yet wherever Kat goes, trouble is never far behind. And it is there; in the ancient Roman-Bath houses that Kat discovers a deadly and sinister plot. One involving her gullible brother Charles and dangerous, wild magic…
I have to say – I just adore this series! Interesting and fun, Kat is probably one of the most unique and entertaining characters I have ever found in Middle Grade fiction. Wild and unstoppable, she is brave and hard headed, doing her best to stand-up against the injustices doled out to her family.
In this second book, not only has the author Stephanie Burgis shown her ability to write the most intriguing and imaginative of plots – but she has made this story much deeper and darker than its prequel. The storylines are more complex with higher stakes, the place setting is both historical and descriptive - and despite their constant fights and squabbles, the relationship between the members of the Stevenson family is always fun and moving to read. I especially liked the character of Kat’s father who, along with Kat’s brother Charles, played a bigger role in this story which made me feel that I got to know the Stevenson family better as whole.
So overall, an incredible sequel that I would highly recommend to all! Intriguing, fun and magically explosive, the Un-lady like adventures of Kat Stevenson is not a series to be missed! 5 stars!
Also if you haven’t all ready, you can check out my review of the first Kat book ‘A most improper magick’ HERE.

Posted by whispering words at 11:37 3 comments: 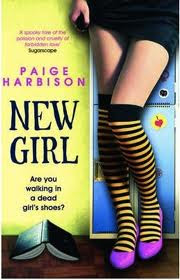 New Girl – Book Review
Paige Harbison
YA Contemporary
Synopsis:
They call me 'New Girl'...
Ever since I arrived at exclusive, prestigious Manderly Academy, that’s who I am. New girl. Unknown. But not unnoticed—because of her.

Becca Normandy—that’s the name on everyone’s lips. The girl whose picture I see everywhere. The girl I can’t compare to. I mean, her going missing is the only reason a spot opened up for me at the academy. And everyone stares at me like it’s my fault.

Except for Max Holloway—the boy whose name shouldn’t be spoken. At least, not by me. Everyone thinks of him as Becca’s boyfriend…but she’s gone, and here I am, replacing her. I wish it were that easy. Sometimes, when I think of Max, I can imagine how Becca’s life was so much better than mine could ever be.

And maybe she’s still out there, waiting to take it back.
Review:
‘New Girl’ is a contemporary retelling of Daphne DuMarurier’s classic novel, ‘Rebecca’ which I read years ago and thoroughly enjoyed. Therefore I was particularly interested to see how Paige Harbison’s new version would compare and I can honestly say that it was pretty amazing. While keeping all the key elements of the original story, Harbison manages to put her own individual spin on the tale making ‘New Girl’ a really intriguing read.
The story begins when our main character (who remains unnamed until literally the very end!) is accepted into Manderley Academy, a prestigious boarding school that she dreamed of attending back when she was 11. However now 17 and about to start her senior year of high school, leaving behind her friends and family is the last thing she wants but, unable to disappoint her parents – she puts on a smile and accepts the offered place.
However when she arrives at the academy, her fellow students are not nearly as warm and welcoming as she had hoped for. Instantly dubbed as the ‘new girl’, our main character soon discovers that her spot at the school only opened up due to the disappearance of another girl – Becca Normandy.
Loved and popular, Becca Normandy was the centre of all things cool at Manderly Academy, but nobody wants to know the ‘New Girl’ who’s replacing her. Everything New Girl does, she finds herself compared to Becca and always falling short – But when New Girl lands herself Becca’s old boyfriend Max, the school erupts in rumours as everyone tries to discover what really happened the night Becca disappeared…
A year apart, the story is told through the dual perspectives of both Becca and New Girl as they go through and experience the same things and situations in Manderly Academy. The plot – despite a few plot holes and slight ‘not sure that would really happen moments - is packed full of intrigue and suspense as every events leads up to finding the truth of what really happened the night Becca disappeared.
The characters themselves were also really interesting. New Girls roommate was sufficiently creepy, and Becca herself was as selfish but relatable villain. The romance however, between New Girl and Max didn’t really work for me – mostly as I found Max quite shallow in the beginning and for someone who supposedly doesn’t care what people think – he really dragged New Girl into a strange on/off relationship.
The ending though I thought was brilliant and ver cleverly done. It certainly put a satisfying end to the book and has put Paige Harbison on my 'authors to watch' list. Mysterious, suprising and all in all a great retelling, 'New Girl' was an intriguing read. 3 1/2 stars! 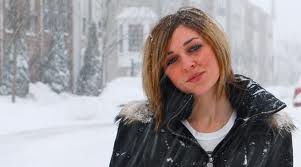 Interview:
1)     What gave you the idea for NEW GIRL and how long did it take you to write?


Watching Hitchcock movies, remembering about Rebecca, and thinking: a girl is jealous of a girl and it’s fuelled by her interest in a guy?  High school! I also wanted to delve into the obsessive compulsion teenagers have when it comes to tragedies involving their peers. If someone goes missing, dies, gets pregnant or anything at all, they obsess. It took me about a year from the very start to the very finish.
2)    While writing, did your characters behave as you wanted them to or did they ever change the direction of the story?


Oh absolutely they changed the direction. When I write, I plan out a couple of points I mean to hit along the way, but I completely let the characters and the scenes drive themselves. If a guy and a girl is arguing, I let them say the things they’d really say, wounding or not. So a girl says something she doesn’t mean to the guy and he ends it. I might have intended that, but as the dialogue crescendos, I just let it go where it wants.
3)    What was the biggest challenge you faced when writing NEW GIRL?


Writing the main character. She was based on, of course, the main character in Rebecca, who was unreasonably meek and spineless. I had to translate that quality to a modern day girl who you wouldn’t want to slap. And at times you still do want to shake my character and say, “stand up for yourself!” But she doesn’t, because she’s real. How many times have we all looked back and wished we done things differently or realized how much we let someone walk all over us? It’s the same for my characters.


4)    Can you tell us anything about any new/future writing projects of yours?
I am working on my next book now. I can’t say too much, but that it delves into the friendship between two girls that become driven apart by their own personal fears made worse by a boy and a discovery in a creepy shop.
5)    And finally, what was the best piece of advice you received back when you were still an aspiring writer?


I never really aspired to be one, actually. It just kind of happened. I started writing Here lies Bridget, title and all, and the next thing I knew, I was a writer. But my mother, New York Times bestselling author Beth Harbison, certainly gave me advice once I was on the road. Most of it was in the form of her reading my books and making notes saying, “This part is stupid.” That’s the advice I took away: recognise when something you write is dumb and unrealistic.

Posted by whispering words at 11:09 2 comments: