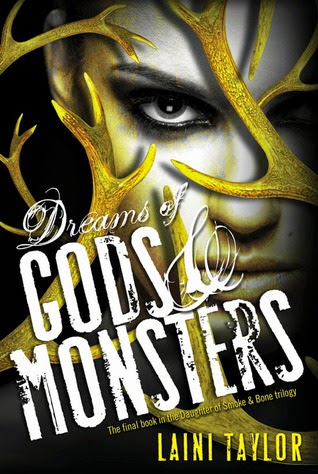 Book #3 in the Daughter of Smoke and Bone Trilogy

By way of a staggering deception, Karou has taken control of the Chimaera rebellion and is intent on steering its course away from dead-end vengeance. The future rests on her, if there can be a future for the chimaera in war ravaged Eretz.

When Jael’s brutal seraph army trespasses into the human world, the unthinkable becomes essential, and Karou and Akiva must ally their enemy armies against the threat. It is a twisted version of their long-ago dream, and they begin to hope that it might forge a way forward for their people.

And perhaps, for themselves. Toward a new way of living and maybe even love.

But there are bigger threats than Jael in the offing. A vicious queen is hunting Akiva, and, in the skies of Eretz … something is happening. Massive stains are spreading like bruises from the horizon; the great winged storm hunters are gathering as if summoned, ceaselessly circling and a deep sense of wrong pervades the world.

What power can bruise the sky?

From the streets of Rome to the caves of the Kirin and beyond, humans, Chimaera and seraphim will fight, strive, love and die in an epic theatre that transcends good and evil, right and wrong, friend and enemy.

At the very barriers of space and time, what do Gods and monsters dream of? And does anything else matter…?

As a whole this trilogy has been magnificent. A real pleasure to read,  this final book takes the reader on a journey of war, peace, friendship and betrayal while every character walks the thin line of life and death. It was a fantastic conclusion to the series.

Beginning immediately where the last book left off, we find Akiva and Karou facing the ultimate challenge of uniting their people against the greater evil presented to them by the emperor. But after hundreds of years of war, can the angels and chimaera put their differences aside, or will their long bred hatred of one another be rooted too deep? But as destiny and prophecies are fulfilled what shape will the future take as lives are lost and the end of days draws nearer. Can Karou and Akiva win against the empire or will the world be changed forever…?

I finished the second book of this trilogy “dreams of blood and starlight’ well over a year ago so it took a couple of chapters for me to get back into the story, to remember the characters, their names and histories - and their past meetings and who had conflicted with who. Still it didn't take me too long to recall everything and I was quickly hooked back into the story.

I love Laini Taylor’s writing style. Her prose is magical and lyrical to the point it almost flows of the page. The descriptions are vivid and bring each scene to life with a breathtaking onslaught of sensory images which continued through all three books to astound and amaze me.

The old characters were all as loveable as I remembered and I liked the splash of drama and intrigue the new ones added to the story. The connections between each person (man/angel and beast) also read genuine and I was sad to say goodbye to these amazing characters when the book ended.

In terms of the story the plot was action packed and fast paced. There were many surprises, some ‘oh my god’ moments and ultimately, a very satisfying ending with a twist that I hope will one day lead to a further/spin off story.

Overall words cannot express how much I have enjoyed reading these books and they will forever have a prized place on my bookshelf. Liana Taylor is a first class storyteller and I look forward to reading her future books. I give a Dream of Gods and Monsters 5 stars! 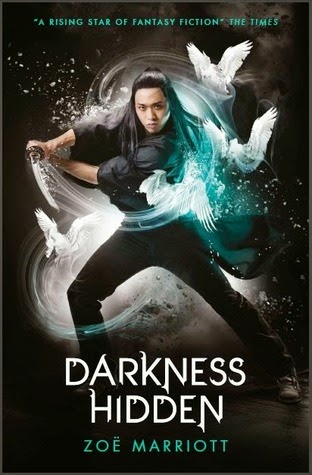 If you haven't read the first book in the trilogy - The Night Itself - you can find my Review of it HERE!

In the electrifying second volume of Zoe Marriott’s The Name of the Bade Trilogy, Mio, Jack and Shinobu have defeated the terrifying Nekomata against all odds, and brought Jack’s sister home alive.

But Mio is still compelled to protect the katana, her family’s ancestral sword, and now the underworld has spawned a worse monster - one carrying a devastating plague that sweeps through London like wildfire.

As Mio struggles to protect the city and control the swords deadly powers, she realises that this time there is no way she can keep everyone she loves alive … and she must make a terrible sacrifice to save the world…

I have read all of Zoe Marriotts books to date and I feel her writing only grows more and more amazing with every book she publishes. When I picked up Darkness Hidden, I was truly in awe because I simply loved each and every page of it! There were no niggles, no shadows of doubt over plot or characters, the story just  swept me up in its arms and carried me from beginning to end in that pleasurable haze that comes with all good storytelling. Its a magnificent read!

Picking up mere hours from where the first book left off, Mio and the gang immediately find themselves challenged by more monsters from the Japanese underworld of Yomi - and this time, they cannot rely on help from the Kitsune. But when Jack falls victim to the sickness spread by these new found fiends, Mio swears she will do everything in her power to save her best friend, no matter what the sacrifice.

But as London shuts down, the city becomes a prison of chaos and Mio realises that while the sword may be the only thing strong enough to defeat the minions sent by the dark goddess, the blade is also bit by bit, stealing away her humanity. Even now she can feel its inhuman voice calling out to her, poisoning her mind as it bids its time, waiting to take possession over her  once more. And she is afraid.

For control over the katakana comes at a terrible price. Yet with her friend on the verge of death, the Kitsune confined to the spirit realm and the world falling to pieces around her, Mio comes to understand that when it comes to the future of mankind there is no choice, and if there was, its not necessarily hers to make. Deep down, she knows she cannot protect everyone . . . surely soon, she knows someone she loves will die. But how much of Mio will they take with them…

This was a brilliant, page turning read that took the reader through a roller coaster of emotions. Rather than a story that lead up to one great, epic battle at the end, each scene threw more and more at the characters so that they barely had time to catch their breath between one catastrophe and the next. With the constant threat of danger, the action was never ending and spaced out with an occasional revelation or romantic moment that only made you love the characters more - and boy does Zoe marriott really put her characters through the wringer!

From the last book, its clear to see Mio has developed a tougher skin. Through her battle with the Nekomato she lost a lot of her earlier innocence and is now aware that through both her experiences, plus the swords gift of increased speed and strength, she has both the ability and capacity to kill - a rather frightening revelation for her.

Mio’s romance with Shinobu has also been kicked up a notch. With many more near death experiences the two have grown even closer, yet it is more than just love between them. They are friends and comrades who share a mutual respect and trust each other explicitly. One can be strong when the other is weak and they balance each other well.

I was sad that - being sick and all - Jack played a lesser role yet even plagued by a supernatural illness her feisty spirit still shone through. However we did get to learn more about Jack’s sister, Rachel. In the last book she had a more damsel in distress part yet in  this book we see that she can be just as vocal as Jack with the same, no bull shit attitude. Dealing with the aftermath of being held hostage by the Nekomata she played an interesting part in the story.

We also got to see different sides to other characters from the previous book, which really put a new spin on how we perceived them - however I won’t mention names as I don’t wish to give away spoilers.

But all in all this was a simply superb read! It had none of the second book drag or wish-washy fillers that I feel many middle books have and I seriously can’t wait to get my hands on the next book! Utterly fantastical, this is a five star read!

Posted by whispering words at 10:30 No comments: