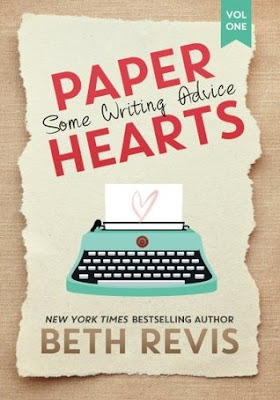 Your enemy is the blank page. When it comes to writing, there’s no wrong way to get words on paper. But it’s not always easy to make the ink flow.

Paper Hearts: Some Writing Advice won’t make writing any simpler, but it may help spark your imagination and get your hands back on the keyboard.

With information that takes you from common mistakes in grammar to detailed charts on story structure, Paper Hearts describes:

As an aspiring writer, I found this book incredibly helpful in every way. It boosted my morale, gave some insightful advice and offered a level of comfort that I have yet to find in other “how to write” books.

Rather than just jumping straight in with Do’s and Don’ts, the first thing Beth Revis shares is her own road to publication. She explains how it was her DREAM to be traditionally published, and no matter how bleak the future sometimes seemed, she stuck to her goal. It took her ten years, ten manuscripts, lots of money in classes and critiques, not to mention bucket loads of time and dedication—but she made this dream happen. If that’s not inspiration for you, I don't know what is.

However what I really liked about this book is how Beth Revis repeatedly emphasises that there is no right or wrong way to write. Paper Hearts just shares the methods of writing that worked for her—and she stresses that every writer must find their own path/style. Also she admits that not every book she writes is the same, and often her own styles and methods change, so it’s important to experiment.

Also while this book does cover grammar, characterisation, and has picture charts that can help with developing plot, everything is written in a very friendly way. Never once did I feel like I was being told what to do, but rather everything was put forward in a suggestive, “you should give this a try” kind of way.

In terms of content, I thought the advice itself was pretty invaluable. If I had this book when I first started writing I know it would have made my life a whole lot easier. Even now, it reassured me that I am doing many things right, although it also made me see there is still much of my writing that can be improved upon.

What also grabbed was the the depth the book went into. Ways in which you can find critiques partners, how to give and receive feedback, as well as many frequently asked questions in regards to ideas, pacing, resources…. this book really did have it all.

The only thing that may be an issue for some writers, is that Beth Revis writes YA and often the examples she uses are geared for those audiences. However I really think this book would be useful regardless of what genre or age band your writing for. This is definitely a book all aspiring writers need on their shelves!
Posted by whispering words at 06:41 No comments: 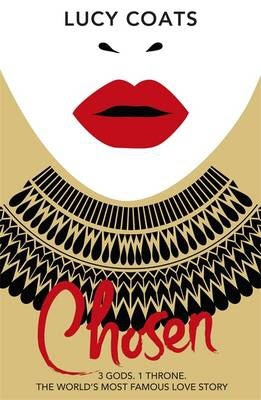 Two warring deities, one Pharaoh’s throne… and the beginning of the world’s greatest love story.

Tryphena is dead, evil Berenice and her dark demon God hold the Pharaoh’s throne - so Cleo must flee the city of her birth and seek out her patron goddesses before it’s too late to save Egypt. Not only must she make her way across the desert to restore Isis’s power, but her goddess also commands her to raise two armies before taking a ship across the Great Green Sea to find her exiled father in Rome. The weight of royalty is increasingly heavy on Cleo’s shoulders - and impossible, scary decisions lie ahead…

Now in possession of the sacred map, Cleo flees into the desert to free her Goddesses and restore their power. Only then can peace reign once more throughout Egypt. But with her evil sister, Tryphena dead, and Benenice and her demon-possessed husband in control of the double-throne, bringing back peace and prosperity to the land will not be as easy as Cleo thinks.

Now charged with raising an army, and tasked with returning her father to Egypt so that she may take up her place as his queen and rightful co-ruler, Cleo must now declare war on sister. But first she must travel across the seas to Rome, where both her heart, and her destiny await…

I really enjoyed this book! The second and final part of a duo, the story depicts the fictional life of a young Cleopatra, and through Cleo’s eyes, Lucy Coats really brought the ancient world to life. With prayers, customs and a few facts spread throughout the text, it was an educational as well as page turning read.

Cleo has changed a lot since we first met her. After finding her courage and surviving trials brought about by both man and Gods, she has developed confidence and a regal air, giving her a commanding presence. Although beneath her tough exterior, she is still the uncertain, humorous, dancing girl we first came to love. Yet watching her make this transition from timid mouse to leader of a rebel army, it was glorious.

Her romantic relationship with Khai also added charm to the story, especially with the arrival of Mark Antony, Cleo’s destined mate. However I liked that this story was still fundamentally about Cleo and Khai, and the sad acknowledgement that while Khai will always be by Cleo’s side, her fate is too great for him. Yet he will always be her first love.

Cleo’s best friend Charm was also there as a sound voice of reason, and with the arrival of new characters—she also found a love interest of her own in Iras. A quirky, warrior woman with a sharp wit and quick tongue. Not only did the romance between the two feel natural, but it was a relationship I wholly supported, even though it came as a surprise to both the reader… and Cleo herself :)

Otherwise the plot moved at a good pace with plenty of action and intrigue. Also with much of the story taking place in a war zone, it was inevitable that some characters would die, however it certainly ups the tension when you don’t know who will and will not make it.

However I still think that it is the younger end of the YA market who will enjoy this book the most. As I said in my review of the first book, CLEO, the language used by the characters is very modern and is easy to relate to. Lucy Coats also dips into the shady topics of periods, ancient toilet systems and the sheer awkwardness of being a girl, that I’m sure many non-male readers would appreciate.

All in all - a great historical read that girls of all ages would enjoy.  4 stars! I can’t wait to see what Lucy Coats will throw at us next :)
Posted by whispering words at 10:00 12 comments: 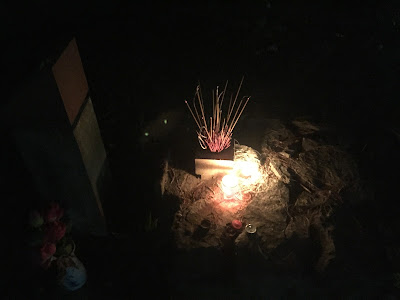 As many of you know I like to travel, and since moving to China back in 2013 I've managed to see many places in and around Asia. However wherever I go, I always keep a written journal and I've decided its long past time I shared some of these stories with you all.

So in no particular order, every month I will pick a random country and share with you one the strange days I had exploring it.

This month I chose Vietnam, for no other reason that this was where I was this time last year. Isn't that crazy?

Dressed in heels and a skirt too short to be considered proper, I was horrified to discover that my boyfriends suggestion of a “romantic midnight walk” was actually an evil ploy to get me to a graveyard. But Hang Duong Graveyard in Vietnam is not your typical haunt for ghosts and ghouls.

Mollified by the females pilgrims in their shorter skirts and even higher heels, I reluctantly joined in the masses that flooded in from all across Vietnam to make this midnight vigil. Paying homage to Vo Thi Sau—a nineteen year old girl who became a martyr after her execution during the Vietnamese war—I joined the line to go pray before her shrine.

Fires burned to either side of her grave and people lined up with offerings of all shapes and sizes. Everything from flowers, fruits, chickens and chocolate cakes, to what looked like a three-piece-suit, were all laid atop Vo Thi Sau’s place of rest. These offerings were later taken one by one to the fire where they were burnt. I was particularly saddened to see the chocolate cakes go up in flames. However I had no time to mourn there loss, for suddenly I was before the shrine.

Handed a huge pile of incense, I obediently lit the bundle and immediately lost about half the incense trying to wave out flames. Unsure what to do next, I quietly asked a teen girl beside me what I was supposed to pray for.

“Anything,” she said, “Although most pray to see Vo Thi Sau’s spirit, or to have her visit your dreams in the night. To have her appear will bring you good fortune.”

Ever the tactful one, I replied, “You want me to pray for a dead girl to visit me in the night?” Thankfully she didn't seem to understand my sarcasm and only nodded her enthusiasm.

Closing my eyes, I prayed instead for Vo Thi Sau to find peace and happiness in the afterlife. Feeling foolish, I also added that if she did feel the need for living company, to check out six senses spa resort, who’s guests I’m sure would be happy to see her. I didn't mention I would be sleeping on the other side of island.

Heading home, my boyfriend and I meandered through the many graves, each honoured with a single candle and sticks of smouldering incense that lit the night like fire flies. Awed by the eery beauty of it, I grudgingly admitted to my boyfriend that the grave site was indeed a place worth seeing.

That was the moment I felt a tap on my shoulder. Turning, my eyes were forced closed against the sudden gust of wind, and when I could see again, a chocolate cake wrapper lay at my feet. My boyfriend and I laughed, but I walked a little faster and made my boyfriend drive our motorbike the scenic route home, just in case Vo Thi Sau was following.

Posted by whispering words at 08:31 2 comments: