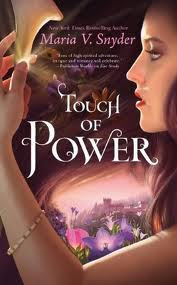 
Synopsis:
Laying hands upon the injured and dying, Avry of Kazan absorbs their wounds and diseases into herself. But rather than being honored for her skills, she is hunted. Healers like Avry are accused of spreading the plague that has decimated the Fifteen Realms, leaving the survivors in a state of chaos.

Stressed and tired from hiding, Avry is abducted by a band of rogues who, shockingly, value her gift above the golden bounty offered for her capture. Their leader, an enigmatic captor-protector with powers of his own, is unequivocal in his demands: Avry must heal a plague-stricken prince and leader of a campaign against her people. As they traverse the daunting Nine Mountains, beset by mercenaries and magical dangers, Avry must decide who is worth healing and what is worth dying for. Because the price of peace may well be her life...

Ever since I read and fell in love with her Poison Study series, Maria V Snyder has remained a favourite author of mine. Just like the rest of her books, A touch of power was a brilliant, intriguing and intensely magical read that is the start of what promises to be yet another fantastical series.

The story follows Avry, a twenty year old girl who has spent the last three years living life on the run. Ever since the great plague spread through the land, those blessed with the gift of healing have been blamed and persecuted for the unstoppable disease. Now as the world’s last healer, Avry’s only goal is survival.

But when she is rescued from the guillotine by a band of rouges, she trades one death sentence for another when she is tasked with curing a Prince from the last ravages of the plague – A feat Avry knows that even with her magical powers, she will not survive. However with the nobility fighting for power, the fate of the fifteen realms remains uncertain and Avry must make a choice. Travel to the other side of the world, to save the man who brought about the demise of her people? Or live the rest of her life hunted for what she is? But with war looming, Avry must quickly learn just who, and what is worth dying for…

This book really is fantastic. A high fantasy novel, it blends together elements of drama, intrigue, magic and self-sacrifice. With vivid descriptions and unique characters, A touch of Power takes the reader on an epic adventure making it a truly riveting read that had me transfixed up until they very end.

Avry is a great protagonist. Brave and kind hearted, she is also smart with a sharp and sarcastic wit. I loved the way she baits and undermines Kerrick. With his depth and dark edge, he hides been a cold mask of uncaring but I really enjoyed watching their feelings for each other develop. For me Maria V Snyder remains the queen of slow-burn romances and watching her characters fall reluctantly in love was simply delicious.

However the other characters were also unique individuals – each one bringing a new element or twist to the story. Flea and Belen were particular favourites of mine and I loved the close-family feeling the group formed on their journey.

The plot is gripping and holds some intriguing concepts and ideas such as the death and peace lilies, and I’m also curious as to the source of the Plague. I really can’t wait for the next book! What with the adventure of this story fully concluded, it left just enough questions unanswered and hinted at plenty of drama to come to keep me wanting more.

Never once did this book drag for me and I happily devoured it all in one night. Utterly fantastical, A Touch of Power is easily a 5 star read!