Goddess of the Rose - Book Review 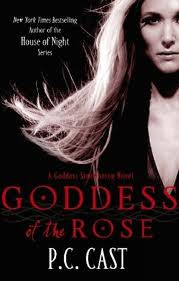 It's not green fingers that have kept the Empousai family's roses blooming for centuries - it's the drops of blood that their women secretly sacrifice for their gardens. But Mikki would rather forget this family quirk and lead a normal life. Until the day she unwittingly performs a ritual and ends up in the strangely familiar Realm of the Rose. As its goddess, Hecate, reveals to her, Mikki has the blood of a high priestess running through her veins. And the realm has been waiting for her ...In a long ago flash of temper, Hecate cursed her Guardian beast with a slumber that only her priestess can undo - and Hecate is counting on Mikki to set things right. At first the beast terrifies Mikki - but soon he intrigues her more than any man ever has. But the only way he and the realm can be saved is for Mikki to sacrifice her life-giving blood - and herself ...
Review:
“This book is for everyone who fell in love with the Beast, and then was truly disappointed when he turned into a handsome prince.”
This is the dedication P.C Cast wrote at the beginning of this book and as soon as I read those words, I knew this would be a story I would love. While I haven’t read all the books in the Goddess Summoning series – I have read most, and without doubt Goddess of the Rose has definitely been my favourite so far!
When modern day women Mikado (Mikki) finds herself transported to the ancient realm of the Rose, she at once steps into her destined role as Hecate’s high priestess. But as she learns how to carry out her scared duties, Mikado cannot stop her ever increasing desire for the realms guardian beast. Imbued with the soul of man, he appears half animal/half God and under his ever watchful eyes, Mikado starts to discover more and more about the man that lies hidden within the beast. But the Guardian guards a deadly secret.
Even as his lonely heart yearns for someone to love him, he knows he must resist Mikado’s feminine charms at all costs, as the day is fast approaching when Mikado must truly fulfil her purpose as high priestess. Yet clueless as to what fate has in store for her, Mikado is relentless… and the beast finds himself tamed. But are they willing to pay the price their love will cost them…?
I must admit that while I really enjoyed this book, it did take me a couple of chapters to get into. But trust me when I say it is worth persevering. Not only does P.C Cast once again create a world that sparks the imagination, but her characters are rich with personality and full of life-like emotions.
Mikado is feisty and sarcastic, yet caring and unknowingly selfless. Her attraction to the guardian may begin on a purely primal level, but I like how she never once considers him as ‘just’ a beast.
As for the Guardian… he is simply heartbreaking. His desire to be accepted, to have someone just speak to him with neither fear or disgust is heart-wrenching. Cursed for his father’s crimes, the Guardian is certain that he is destined to spend eternity alone, never to know love or friendship – only duty. And I truly love how Mikado’s entrance to the realm of the rose truly shakes up his beliefs and – for lack of a better phrase – literally rocks his world! ;)
However while I found the pacing of the plot to be rather slow, it does give plenty of time for romance between Mikado and the Guardian to grow, moving from a slow simmer to a full on scorching burn.
Magical and full of fairytale goodness, Goddess of the Rose is a fantastic read and one I would recommend to anyone to anyone who loves happy-ever-after endings, Beauty and the Beast retellings, or just gushingly romantic stories. 4 stars!