What Not To Do If You Turn Invisible - Book Review 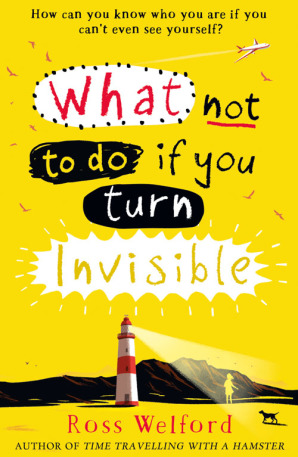 What Not To Do If You Turn Invisible
Ross Welford
MG Adventure
UK PUBLISHER: Harper Collins Children’s Books

Other Books by Ross Welford:
Time Travelling With A Hamster
The Dog Who Saved The World
The 1000 Year Old Boy
The Kid Who Came From Space

Turning invisible at will: it’s one way of curing your acne. But far more drastic than 13 year-old Ethel Leatherhead intended when she tried a combination of untested medicines and a sunbed.

It’s fun at first, being invisible. And aided by her friend Boydy she manages to keep her extraordinary ability secret. Or does she …?

When one day the invisibility fails to wear off, Ethel is thrown into a nightmare of lies and deception as she struggles to keep herself safe, to find the remedy that will make her seen again — and solve the mystery of her own birth…

Ross Welford is fast becoming one of my favourite authors - although I may be a little biased. Being a Geordie myself, its pretty awesome to read a book set not only in Newcastle, but around the coast of Whitely Bay where I grew up. However what captured me most about this book was how the story seamlessly merges reality with a dash of science fiction. Funny, relatable and with an underlining family mystery, What not to do if you turn invisible was a real page turner.

When thirteen-year-old Ethel Leatherhead mixes Chinese magic medicine with a prolonged sleep on an sun bed, she discovers she’s lost more than her acne. Her whole body has disappeared! But being invisible isn't as fun as it seems. And when in an attempt to steal back an incriminating photo — Ethel learns that playing with fate is a dangerous thing. Now she may just be invisible forever….

This was a really fun read. Ethel is a very relatable protagonist (applause to Ross Welford for capturing a female POV so well) and while she doesn't always make the best decisions, she is loyal, quick thinking, and a generally nice person. Easy to like, her adventure is both humorous yet heart wrenching, and with so many layers to the plot - it’s a story that is easy to be swept into.

One of the things I really enjoyed was how each character has a secret - all of which affect Ethel in some way - and all of which add so many subplots to the story. Not only does this mean that every character is fully fleshed out, but everyone from Ethel’s best friend, to her grandma and great grandma, even the evil twin’s at school, they are all involved in something that turns out to impact upon Ethel. Whether it be revealing truths, helping her grow a spine, or just making her a better person in general - this all comes together to make a really great story.

Like Ross Welford’s last book - Time Traveling with a Hamster - this book also has a dash of science fiction. However I felt Ethel’s invisibility was explained very simply so that even younger readers can understand. Ethel's reaction to said invisibility was also both believable and hilarious - and comes with plenty of “don’t try this at home” warnings.

Otherwise the story focuses on the theme of family and relationships. It explores trust and friendship, and I liked that this book lacked all the angst and finger-pointing hate that similar teen books have. As I said, Ethel is a generally nice person and you can really tell how much she loves her family. This helps her overcome the hurt she feels after uncovering some under-the-rug secrets, and wraps everything up nicely.

Overall I think this is a book many tweens, teens and adults will enjoy. Ross Welford has a knack for taking a simple story and, with a sprinkle of magic, turns it into something truly unique. I can’t wait to see what he will write next! 4 stars!

Need more magic and mystery? Then checkout THE DRAGON WITH A CHOCOLATE HEART and COGHEART

Posted by whispering words at 04:34